On Columbus Day, October 12th, 1962, I was 15 years old when our region experienced one of its worst windstorms of record. Winds were clocked as high as 150 mph, the roof of the wooden grandstand at Memorial Field was blown off, and trees were down everywhere. It was a mess and the clean up began immediately.

By the time summer approached and school was out in 1963, there was still clean up being done from this storm. One of the casualties of this storm was Pete Rippe’s barn. Pete Rippe had acreage along the south side of Holly Street and his fields stretched all the way from Newport Way (then called the Renton-Issaquah road), east to the Issaquah creek. The Issaquah School District Administration and Issaquah Valley Elementary now occupy this land.

I was 16 years old in the summer of 1963 and my family had recently moved into a rental house at the end of NW Holly where it meets the Issaquah Creek. I had 3 close pals that I hung around with regularly in that neighborhood. One of them was the son of our landlord for the house we rented. He lived just west of us on the corner of 4th and Holly. My other two buddies lived within a quarter mile radius.

The four of us would get into innocent mischief for entertainment such as “The Purse Gag”. We would take one of my mom’s old purses and tie fishing line to the handle or straps, then leave it lying beside the road while we hid off in the bushes. Hanging on to the other end of the fishing line, we would wait in the bushes for some unsuspecting passer-by to stop to investigate. Then at just the right moment when they were bending over to pick up the purse, we would give the line a tug and the purse would slide away.

This, of course, would get a mixture of startled reactions. Most people had a sense of humor and would just chuckle at us. Some were not very amused and might give us some harsh words. One fellow in particular got mad enough to chase us away. Later one day he saw us playing the gag and cleverly stopped his car so his tires were on top of our fishing line. He then got out, snatched up our purse and drove off laughing at us. We were not to be outwitted, however.

We waited a few days, got another purse and left the fishing line off of it. We filled it with “cow droppings” from Pete Rippe’s field and placed it conspicuously in it’s normal baiting position. We then waited. We must have known when this fellow would be coming by, as sure enough, he came by, took the bait, and drove off chuckling to himself again. This time, after about a half block, he came to a screeching halt, threw the purse out his window, got out and started shaking his fists at us. I still chuckle over that, 42 years later.

I remember the summer of 63 as being a rather dry and warm one. There was a natural hole in the Issaquah creek right at the corner of our property and we swam in it, as best we could. It wasn’t all that deep or big. It was June, school was out and my buddies and I got a big idea that summer. Why not see if we could make our swimming hole bigger and deeper? Our landlord, my buddy’s dad, was in construction and we tapped his expertise on how to build a dam. I don’t remember whether we actually filled him in completely with what our intentions were, but he showed us the basics of using an A-frame structure and using boards from the bottom up to build it. It ended up looking something like this. 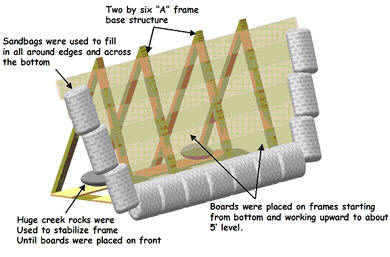 Diagram of dam that Mike Atkins and his buddies built on Issaquah Creek in 1963.

Pete Rippe’s misfortune of having his barn collapse in the Columbus Day storm was our good fortune, for it became the source of our lumber. Pete Rippe was a kindly old man who lived alone with his dog, whom we would hear him talking to regularly. He would pay us well to mow his yard and he always let us pick fruit from his trees as well as play football and baseball in his cow fields. I know I lost more than a few of my dad’s golf balls in those fields as well.

We approached Pete about letting us use some of the barn lumber for our dam. He apparently had already sold the lumber to someone else, who hadn’t yet come to get it. He told us “Now if a few boards turned up missing – I don’t think anyone would notice”. That’s all we needed, we were off and running.

The landlord’s son was able to get a bunch of sandbags from his dad, which we filled just up the creek at a sandbar. We built the dam right in place in the current using heavy creek bottom rocks to hold the A-frame structure in place. As we attached the cross boards and worked our way up the face, the current provided the pressure to hold it in place. We had it completed in just a couple days but we were forever filling holes and leaks with sandbags. The finished product, our swimming hole, looked something like this. 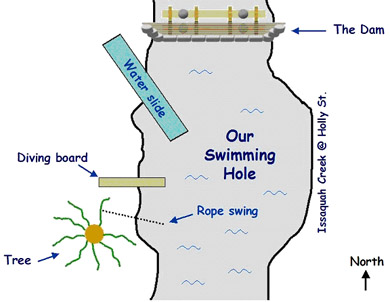 A diagram of the amenities Mike Atkins and his friends associated with their swimming hole in 1963.

The very center of the hole was now about 6 feet deep. The creek actually backed up as far back as Dogwood. We scrounged up some money by turning in pop bottles and bought ourselves a 4’ by 8’ piece of Masonite and cut it to make a water slide. I had some aquamarine enamel paint left over from something and extra thick coats of that made it slick and waterproof. We had a rope swing and a 2” by 12” plank diving board. In those days, no one worried much about the dangers of diving boards like they do today. Just the same, I remember consciously diving shallow every time just out of common sense. We mostly used it for “cannon balls”.

Once the swimming hole was completed, the word spread around and we had quite a few of the local kids swimming with us. It was indeed a carefree and fun summer. Normally we would be hiking 2 miles to Lake Sammamish State Park to swim but now we had a swimming and fishing hole in our back yard. We still hiked to the state park that summer as that was where all the other kids and, of course, the girls were. Like most projects of this nature, the large part of the fun that held our interest was the challenge of being able to do it at all. I think we all knew that the dam would have to come down at the end of summer so as not to interfere with the annual salmon runs. Being kids, we postponed it as long as we could.

Near the end of August, the fish & game department were hounding my landlord to take it down and he in turn would get after the four of us. School started in September and we still had not taken the dam down so the fish & game department decided it was time to take action and did it themselves. I was not present to see it but my landlord was. Apparently they came with a team of two horses and entered the creek downstream from the dam, walked them up to the dam and hitched on to the A-frame structure right in the center. The horses pulled on the dam until it broke and the rushing water lifted the horses up and carried them away downstream. The horses were unharmed. As soon as they regained their footing, they climbed out of the creek. I’m told it was a sight to see. My buddies and I looked for our lumber downstream later and could not find a stick of it. The water must have carried it all the way to Lake Sammamish.

We were very fortunate in that we were not fined or put in any trouble for what we did. It was a different world then. Issaquah was a fun and charming place to grow up in the 60’s. The bureaucrats would certainly not tolerate something like this in this day and age. Somebody would HAVE to pay for something and possibly be put behind bars. I miss the old Issaquah but, alas, the hands on the clock are not running backwards. 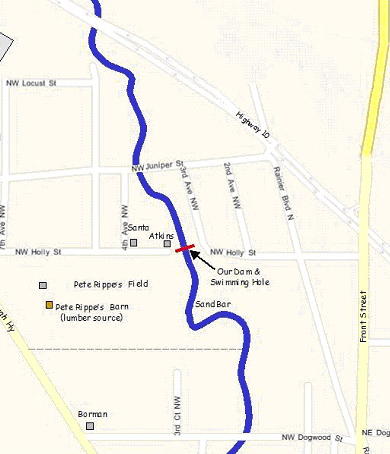 This map depicts the location of Mike Atkins’ swimming hole and other locations. 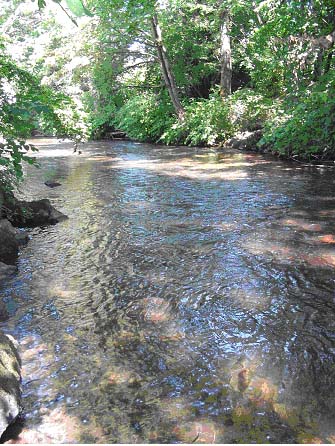 The location of the swimming hole as it looked in July 2005. [Photo by Mike Atkins]

75 Years of Service: History of the Kiwanis Club of Issaquah