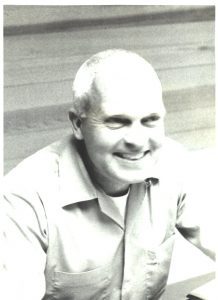 Gerald Lider during his time at Maywood Junior High.

Issaquah was my first teaching assignment in 1948.  I taught grade 7 in the old Issaquah Elementary  School where Clifford Johnson was the principal.  Issaquah Superintendent Mykland signed my first contract although Dr. Ed. K. Erickson became the superintendent of the school district beginning the fall of 1948.  My first teaching contract paid $2,900.00 annually plus $300.00 for bus driving.

In 1948 there were fewer than 40 certified employees in the whole Issaquah District.

I subsequently taught and coached at Issaquah High School from 1949-1956, teaching a variety of subjects which was essential in a small high school.

In 1950 I enrolled in a driver training course at the University of Washington.  It was taught by Amos E Neyhart, “the Father of Driver Education”.  That fall I initiated and taught driver education and behind the wheel instruction for several years including evening and adult classes.  This program was made possible through the co-operation of the American Automobile Association, the Issaquah School District 411 and Stonebridge Chevrolet.  Stonebridge Chevrolet provided a dual-controlled vehicle for the driver training program in 1949.  The school paid all maintenance and operating expenses (including gas and oil) and also paid for the insurance costs.

In 1956 I was elected to be the first principal of Sunset Elementary School where I remained until 1966.  Sunset was opened in the fall of 1959 and served the district for 29 years before it was demolished in 1988 and replaced by a new facility.  The principal with 12 teachers welcomed 314 students the first fall.

While awaiting the opening of Sunset I taught (grade 6) at May Valley Elementary as did the rest of our Sunset faculty.  Then for a period of time I had my class in the old shop building alongside the old Issaquah Elementary School.  While there I drove a school bus to pick-up and deliver my students.  It was truly a “one room school house.”  The shop was so old it had [many] ceiling leaks so we used about eight coffee cans to catch the rain when it poured through the ceiling.

If you moved to Issaquah, why did you choose it?

We chose to live here because my wife, Milly, and I liked the small town atmosphere of Issaquah with the mountains, lakes and Seattle nearby.  (One hour from sea level to ski level.)

If you have lived here all or most of your life, why did you choose to stay?

We raised our three children here (Wendy, Eric and Kirk) and liked the school district so well that all three began their education in the Issaquah schools and graduated for Issaquah High School.  Two became school teachers.

Were you affected by earthquake damage to the schools in 1949 or 1965?

1949. I taught a class of 39 seventh graders locate din a classroom on the 3rd floor of the old Issaquah Elementary. When the earthquake “hit” we had just dismissed the students to go to lunch, so the third floor had only a few teachers there at the time. We grabbed the stairway hand rails to keep our balance from the sway of the building. One of our students was leaving the building via  a back door when one of the many bricks falling from the chimney hit him in the shoulder, breaking it, I believe

1965: At Sunset Elementary School, we were all on ground level so the effect wasn’t as great as 1949. Everyone was well under control so there were no major incidents, nor accidents, nor damage.

What kind of extracurricular activities were you involved in?  Did you play football or chess, or did you act in the school plays?  What were memorable games or plays?

I coached the 8th grade basketball team the first couple years in Issaquah and we played games with other elementary schools in the Snoqualmie valley. My later coaching included IHS assistant basketball coach with Frank Ecker, and asst. coach in track with Dan Cyle.

One memorable incident occurred during an IHS varsity basketball fame in the old green gym. In the midst of a game we were beginning to fall behind. One overzealous fan yelled from the bleachers, “Ecker, why don’t you do something?” Coach Ecker stood up, faced this fan and firmly asked, “Now just what would you suggest?” TOUCHE!!

Most notable tall players as this period of time were Jim Brooks and Nick Kelderman (6’7”) who later played basketball at Pacific Lutheran University. This team went to the (NAIA) national finals 2 years in a row under Coach Harshman.

Where did you and your friends spend your free time as teenagers?  What kind of mischief did you get into?  How did your parents or teachers punish you when you got into trouble?

Sometimes the paddle was used in classroom discipline and it usually got to “the seat of the problem”!!

What barbershop or beauty shop did you frequent?  What do you remember about these places?  What were the popular hairdos when you frequented the beauty shop?  Did you do a lot of socializing at the barber and beauty shops?

Paul Benson’s Barber shop. He was very disgusted with me when I eventually got a crew cut. With the shorter hair, I didn’t require his services as often as usual!

What is memorable about Lewis Hardware?  What items did you purchase there?

It was the main source of hardware supplies with friendly service. We also purchased fishing licenses there with accompanying FISH STORIES – both ways!

Did you purchase things at the Grange Mercantile Building?  What type of things did you get there?  Did your family rent a frozen food storage locker?

We purchased all our groceries at the Grange. We would charge them and pay in full at the end of each month when we were paid.  We also rented a frozen food storage locker in an effort to save money.

What do you remember about Grange Supply?

We purchased our heating oil from the Grange Supply. Early in the 50’s they periodically filled a large 50 gallon drum at the rear of our home.

What kinds of jobs did the War bring to the area?  Where did you work at this time?

Prior to coming to Issaquah, I was a Lt (j.g.) in the Naval Reserve serving aboard landing craft (LCI #2 and LST #907) in both the Mediterranean Theatre of Operations and in the Pacific Theatre (1943-1946). My wife, Milly, was in the U.S. Cadet Nurse Corps for the same period of time.

What do you remember about Labor Day Celebrations or Salmon Days?

Enclosed is a Labor Day photo of the Issaquah teacher’s float in 1955 with the caption, “Can our school keep pace with the human race?” It provided a stork as the teacher with an old fashioned teacher’s desk and the old type of student desks with “live” students aboard.

What were some of the other memorable special events and occasions in Issaquah?

After the opening of Sunset Elementary School, the landscaping was left for the students, parents and faculty to accomplish. There was no school district money spent, so donations were solicited and we spent many days and weekends in landscape improvement.

What are your memories of Vasa Park?  What did you do while there?

Living next to Vasa Park, we have seen it evolve from smaller group picnics to very large and involved corporation picnics throughout the summer.

How has the salmon hatchery affected Issaquah?

I.H.S. biology field trips to the Issaquah Salmon Hatchery were very educational and convenient, from the old high school especially. It has become a great tourist attraction, for its an exceptional place to visit, especially in the fall.

Were you involved with farming in Issaquah?  What farm did you work on?  What was grown or raised there?

Issaquah Valley Dairy.  “The Milk Man”,  Bill Bergsma Sr., was truly “Mr Issaquah”.  He and his fellow workers delivered milk door-to-door throughout the region.  Mr. Bergsma was exceedingly friendly to everyone and was a very positive asset for Issaquah.  Among other things, at Christmas, he would visit schools and individual homes dressed as Santa Claus.  Many believed that he was the “real” Santa who provided lots of fun and excitement for local children year after year.

What was your first car?  Did you buy it from Hepler Ford Motors, Stonebridge Chevrolet, or the Kaiser-Frazier dealership?

Purchased a new 1948 Chevrolet from Stonebridge Chevrolet and several more of their Chevrolets thereafter.

What church did you attend?  What memories do you have of this church?  Were there any pastors, reverends, or church leaders that stand out in your memory?

Several years after World War II our church purchased the former Japanese Community Center in Bellevue for Grace Lutheran Church services.  (There was no Lutheran church in Issaquah at that time.)