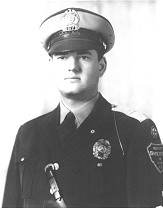 Paul Bell was born on December 14, 1914 in Covington, Tennessee, the son of Raymond and Leona (Stuart) Bell. Raymond’s family originated in England and Leona’s in Scotland.

In 1930, at the age of seventeen, Paul left Covington and joined the US Navy. He finished High School while in the Navy, and started his service as an Electricians Striker (apprentice). He eventually managed to secure the coveted position as ships barber and served aboard the battleship, USS Colorado.

Paul left the Navy in 1935 and set up his own barbershop in Kirkland. In 1937 he married Valeria C. Green of Canada. Valeria, who was born November 13, 1914, opened Bells’ Beauty Shop at the rear of the barber shop.

Paul found barbering less than rewarding and sought a job with the King County Sheriff’s Office in 1937. While there he served with O.K. Bodia, Ted Crouse, Earl Allen, Bob Lee, Ed Staargard, Bill Severyns, and others. Paul mentioned that in those days there was no pension plan. Officers worked an eight-hour, six-day week. Paul was a trained member of the First Aid Team. These were the days before the fire department personnel were medically trained, and E-9-1-1 was still some plus 30 years into the future.

An interesting note was that officers were not paid for overtime, nor were they paid for training during non-duty hours! Paul remained with that agency as a Deputy Sheriff on patrol until 1942 when he again enlisted in the Navy.

He entered the service with an advanced rating as Pharmacist’s Mate 3d Class and was eventually promoted to 1st Class. He served with as a Lab Technician with the Dispensary – Advance Base Unit, in New Guinea, Hollandia and Moritai. In November 1945 he was assigned to the Naval Hospital at Bremerton and was mustered out of the Navy. 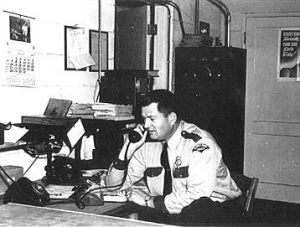 That same year Paul joined the Kirkland Police Department and served as a Patrolman until 1957, when he became Chief of the Issaquah Police Department. One of the first steps Paul took was to purchase badges for the force. At the time it was comprised of only himself, his Sergeant Tom Bass, and several auxiliary officers. All the officers had to provide their own uniforms, firearms, and ammunition. Paul retired from IPD in 1958.

Paul’s personal car was a 1938 Hudson Terraplane. Since he was on call twenty-four hours the car was equipped with a red light and siren. The uniform of those days was quite different from what we are used to seeing officers dressed in today. Paul wore a waist length uniform jacket with tie, a Sam Brown gun belt, Jodphur style breeches, and leather leggings which buckled on the side!

Bell  was later employed for a short time by the Washington State Liquor Control Board. 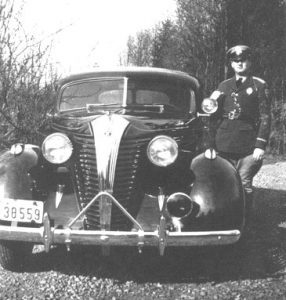 Paul Bell with his 1938 Terreplane, which was equipped with a red light and siren. (Photo courtesy of Issaquah Police Department)

Paul and Valeria left for Arizona and retirement in 1970. While there Paul was a member of the Maricopa County Sheriff’s Posse. The area Paul lived in had a population of around 10,000 persons and numerous golf courses. As a former peace officer, Paul was deputized with full arrest powers. He and other posse members patrolled the area in golf carts, which enabled them to travel where other vehicles would prove impractical or damaging to the golfing greens. Paul and Valeria also enjoyed traveling cross country in the their motor home. They finally returned to the Issaquah area in 1990.

Paul is active in the area and resides at the Bellwood Retirement Center. His wife, Valeria passed away in the spring of 1996 after suffering a massive stroke.