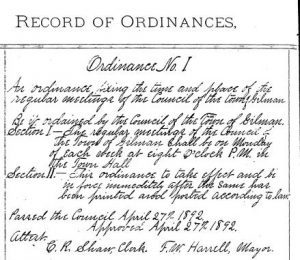 HARRELL, Dr. Frank W., Mayor of Gilman, Wash., was born in Suffolk, Va., July 24th, 1858, received a classical education in the University of Maryland and the College of Baltimore, graduating with a degree of M. D. in 1879, and at once accepted the position of Acting Assistant Surgeon in the United States Army, which he continued to fill until his resignation in the spring of 1882.

After practicing medicine for a short time in the Indian Territory, he removed to Edenton, N. C., where he remained until the fall of 1883. In the spring of 1884 he went to to Japan and connected himself with the Episcopal Mission. In 1885 he entered the Imperial College as Professor of English Literature and Latin, and assisting at the inauguration of that institution. He is a member of the Imperial Surgical Society of Japan.

In 1889 he went to Washington and practiced in Pierce County until his removal to Gilman in July 1891.

He was elected Mayor of Gilman without a dissenting vote in April, 1892.

He is the surgeon of the Seattle Coal and Iron Company.

He is a member of the Royal Society of Good fellows, of which he is the Secretary and Medical Examiner.

He was married in Yokohama in April, 1885 to Miss Carrie Ballagh. She was the first child born in Japan of American parents. Two children grace their union.

The doctor is a Democrat, an active politician, and has been a member of both the State and county conventions of that party.