I chose this recipe for Brown Bread as the week’s recipe mostly because I love brown bread. The only kind, though, I’ve ever had is from the can – where it comes out in can form and you slice it however thick you want it (kind of like cranberry sauce.) It was a special treat growing up and I’m curious how this recipe compares to the can version. I’d like to make it and see if it’s as dense and I’m sure I could actually bake it in a can to get that same effect.

The author of this recipe was identified by Harriet Fish as Lucy Ballinger (although Harriet has written on the card “Leha” Ballinger.) Mary Wold didn’t have an actual Aunt Lucy but Lucy Ballinger was living in the Newcastle/Squak area in 1900 (she was 65 at the time) and then later in Seattle. Perhaps Lucy was the type of woman who was an “Aunt” to everybody.

There are some things I love about this recipe. As do most of the recipes in Mary’s collection, they assume that the reader knows how to bake. There are no exact measurements for temperature or length of time. People knew that ovens varied and could adjust accordingly. I also love, after hearing so often, that baking is “an exact science” just how inexact the recipes are. A handful of this, 2 or 3 tablespoons of that, and a different measurement for teaspoon (one regular and one “large”.) I also love that the dough should be thickened “tolerably” with graham flour. I suppose I won’t know what that means until I make it!

Thicken tolerably with graham flour.
Bake in a moderate oven. Grease and dust pan with flour. 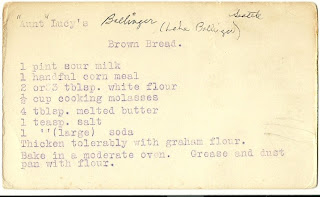 ← Recipe of the Week: Most of the Garden An Opportunity to "Do History" →