Food is always a subject that peaks interest. What we eat and how we prepare it changes so quickly – think of what you grew up eating, is it something you still prepare? I’m currently sorting out and digitizing some recipes that have been in our collection for awhile. The ones I’ve first started on are from a box of recipes from Mary Wold that came into the possession of Harriet Fish.

We have an article written by Harriet Fish to go along with the recipes – the article describes what she first found when she opened the box. Unfortunately, what we have now doesn’t match Harriet’s article – not completely anyways. Recipes are missing and Harriet seems to have added her own. Luckily, we have determined which are the originals to the box and which are the extras added at a later date.

But the recipes that are missing are the ones that intrigue me the most. They are mostly main dishes and include such titles at “Codfish a la Mode” and “Welsh Rarebit.” But there are some good ones that remain. I’d like to begin a series of posts containing a recipe and the women behind them as each recipe generally has an old Issaquah name attached to it.

The first recipe is called “Most of the Garden.” The recipe is handwritten on a piece of paper and slowly wearing thin. I chose it as the first recipe because of its fragility (I wanted to digitize it right away) and because it sounds delicious. It’s a sort of relish and indeed uses “most of the garden.” There is no attribution on the recipe and Harriet doesn’t say in her article if she knows who wrote it. Nevertheless, I hope to try the recipe myself one of these days.

Most of the Garden

Put all but beans through medium food grinder.
Dissolve ½ cup salt in 1 qt. water and pour over this ground mixture – not the beans.
Let stand over nite and drain.
Soak kidney and lima beans a few hours then cook until done. Cook the string beans.
Make a syrup of 2 c sugar and 2 c vinegar.
Combine all ingredients and cook 10 min after it begins to boil.
Seal boiling hot.
Delicious relish. 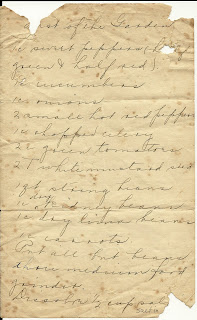 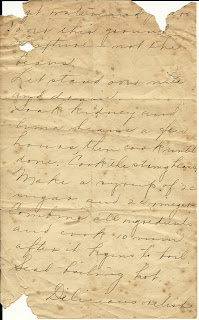