As I sit here eating my store bought doughnut, I can’t help but think this recipe is the most appropriate for the week. Reading through these recipes and trying to decipher some of them makes me wish I wasn’t in the middle of a huge kitchen remodel project in my home. I wish I could taste test some of these recipes before posting about them on here, but I just have to settle for eating their store bought alternative while I compose a list of all the recipes I’ll try out when my new and improved kitchen is finally installed.

The title of this recipe, “Mother’s Doughnuts” is kind of ambiguous. Our good friend Harriet Fish labeled it as Henrietta Wold’s recipe. Henrietta was indeed Mary Wold’s mother, but I’m not inclined to believe this is her recipe. My main indication is that typewritten at the bottom of the recipe is the name “Colleen.” It’s unfortunate that we don’t have a last name or anything else to help us decipher who Colleen may have been but through research I have an idea.

A good majority of Mary’s recipes come from her friends and women her age. I looked at every Colleen that we had in our Family Tree database and found only one that was in Mary’s generation: Colleen Neukirchen Orchard. While this isn’t a perfect match, I did find that this Colleen attended nursing school in Seattle in 1911. We know that Mary Wold was in nursing school in 1914. Again, this doesn’t fully indicate that Colleen Neukirchen Orchard is the Colleen from the recipe but it’s as close as we may get.

If the recipe did indeed come from Colleen Neukirchen Orchard then we have two options as to who “mother” is. Colleen’s mother was Selina Neukirchen (we do not know her maiden name) who was born in France. She died when Colleen was 7 years old. Colleen’s father, John Neukirchen, didn’t remarry until 1909. I’m not certain that at age 18 Colleen would have considered her father’s new wife as “mother.” Anyways, I really can’t be certain about any of this but I think it’s as close as I can get.

If “mother” is indeed Mary’s mom (and Colleen is just a random typo…unlikely) then it would be Henrietta Walters Wold. We know that by the time Mary was 14 years old Henrietta was living in Steilacoom, WA at Western Washington State Hospital for the Insane. We don’t know what Henrietta’s condition was but she was in Steilacoom in the 1900, 1910 and 1920 censuses. By 1930 she was back home living with Mary and Sena in their home. She died in 1938. This is all interesting, but it doesn’t help us determine authorship of the recipe.

Anyways, now onto the important business – actually making the doughnuts. One ingredient stands out – “sweet milk.” Sweet milk is just fresh milk, generally whole (not non-fat.) When milk went sour in the “old days” people used it in baking, so they would distinguish fresh milk from sour milk by calling it sweet milk.

Like many of the other recipes in Mary’s collection, the instructions are lacking and all there is are ingredients. But as Harriet Fish said in her article about Mary Wold: “Mother’s Doughnuts gives ingredients but no directions…I’m sure [they] needed no directions. You fry them, of course!” 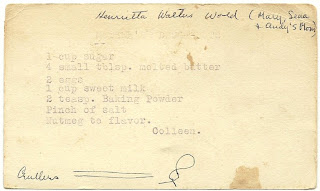 ← Recipe of the Week: Mince Meat The Irish in Issaquah →