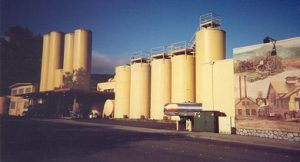 Issaquah’s Darigold Plant has been site of the continuous operation of a dairy facility since 1909. In that year, it was opened as the “Northwestern Milk Condensing Company” by a group of local businessmen looking for an outlet for the area’s dairy farms. Under the auspices of the Commercial Club, Tolle Anderson and other leading Issaquah citizens organized the Northwestern Milk Condensing Company. The business was incorporated by George M. Clark as president, Dr. William Gibson as secretary, John Anderson as treasurer, P.J. Smith, and A.F. Giese on May 29th, 1908. Early activities included condensing milk, manufacturing butter, making ice, and canning fruit and vegetables — all for the Seattle market. Later known as the Issaquah Creamery and then the Alpine Dairy, the plant was Issaquah’s largest employer at the time it became part of the Darigold Cooperative in the early 1960’s. As dairy plants in other towns were closed, Issaquah’s plant expanded and took over butter production for the whole area in 1970. Today, the plant produces sour cream and cottage cheese in addition to butter. 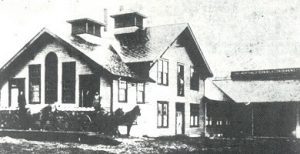 The business eventually capitalized at $25,000, and divided into 250 shares valued at $100 each. The business thrived at this location for 5 years, then was leased to others until local owners again acquired the business in the 1930’s. Renamed Issaquah Creamery, the business enlarged its physical plant at the site, and opened a Seattle distributing plant on Rainier Avenue South in 1932. Later known as Alpine Dairy, the business merged with Darigold in the early 1960’s. At that time, it was Issaquah’s leading employer.

[The following text is adapted from the Issaquah Historical Society’s 1998 “Historic Properties Inventory”]
The Darigold Cooperative has an important place in the history of successful dairy cooperatives. Darigold’s umbrella spanned from Enumclaw to Mount Vernon, from Lynden to Chehalis and beyond. The history of the Issaquah plant is part of this wider story. The 1950’s saw numerous plants closed and other closures followed during the 60’s and 70’s. But in 1970 the Issaquah plant took over butter production for the whole area; a spray dryer had been in operation here since 1957.

Darigold Farms was the last major railroad customer in Issaquah after the line was truncated in the early 70’s. Trains would make a special trip down the east shore of Lake Sammamish just to visit the plant until the tracks were abandoned in the late 1990’s. Locals referred to this trip as “the butter train.” Although the butter train stopped running in the late 1990s, Issaquah’s plants has continued to produce and distribute yogurt (for the most part) to Washington, Oregon and Idaho.

The current plant is a complex of buildings and additions accrued over the decades. An auxiliary wood frame building from the original plan is still visible in the complex adjacent to the railroad tracks on the west side of the site. Warehouse buildings with metal siding and multi-pane industrial-sash windows and covered loading docks were built in the 1930’s; they are relatively unaltered today. The series of buildings and additions constructed in the later 1950’s and early 1960’s are of concrete block with low-pitched or flat roofs. The buildings on the site are generally plain, box-like and utilitarian, punctuated by the towering milk silos. There is a large truck staging area on the northern portion of the facility. 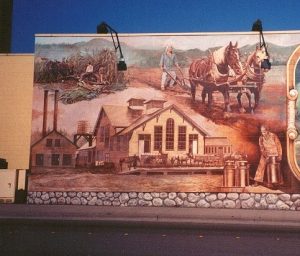 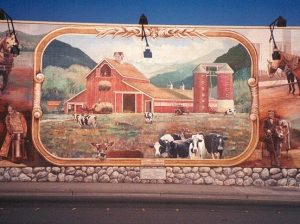 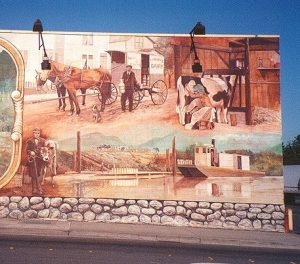 In 1995, artists painted a large mural on the dairy’s large wall, which faces Front Street. The mural is titled “A Century of Dairying in Issaquah,” and commemorates the Issaquah Valley’s rich dairy history. The work was a collaboration of artists Larry Kangas, Nichole Parsons and Evan Jones. Prominently depicted are the creamery as it originally appeared (left), and the Pickering family’s dairy barn and farm (center).
Bibliographic References
Issaquah Historical Society files; King County Tax Assessor records; Satterfield, Archie. The Darigold Story: The History of a Dairy Cooperative in the Pacific Northwest, Darigold, Seattle, WA, 1993.
See More Buildings & Sites