Larry Kangas painted this logging mural based on several photos from the Issaquah History Museums’ collection.

This 1998 mural depicts Issaquah’s logging industry circa 1900-1940. At this time, old growth cedar and fir logs were being cut from the hills surrounding Issaquah and milled in the town’s many lumber mills. There were a number of railroad spurs that made transport of lumber into town easier. The trees growing on the hills today are second and third growth.

Prior to 1960, Sunset Way was known as Mill Street, referring to mills that were located on either end of the street when the town was first incorporated in 1892.

Larry Kangas drew inspiration from this photograph of a logging crew with steam donkey. (IHM 91-7-56)

One of the original source photos used in the design of the mural.  According to Eric Erickson:  “The photo is of the Issaquah Mill Company’s yarding engine and logging crew taken in 1903 in the vicinity of what is now Overdale Park. People in photo are William Robert (Tap) Bush with beard in background at base of large tree, Ralph Darst holding two horses, Charlie Baxter in white shirt seated on donkey, Dave Hailstone holding white horse. The steam donkey was built by Washington Iron Works in Seattle and is a two drum yarder with 9 by 10 1/4 inch cylinders, manufactured on February 10, 1903, builders #632”.

Larry Kangas as work on the logging mural.

Larry Kangas in front of his work. 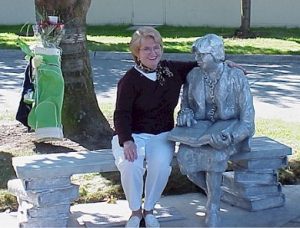 Linda Ruehle, at the celebration of her retirement, poses next to a statue inspired by her long tenure as City Clerk. (Photo by Steve Gierke, 2001)

Linda Ruehle, City Clerk for the City of Issaquah retired on June 1, 2001, after serving the City and the community for 30 years.  On October 5, 2001, Linda was honored by her City during a dedication ceremony of a life-sized bench sculpture installed outside the City Council Chambers at the corner of 1st Ave. SE and E. Sunset Way.

The cast aluminum bench was sculpted by famous Pacific Northwest artist, Richard Beyer, who is most well known for his “Waiting For The Interurban” sculpture in the Fremont district of Seattle.  The bench features a “representation” of Linda sitting on a bench supported by ordinance books, as she looks through one of the record books (see photo).  The bench was paid for by the City of Issaquah Arts Commission and private donations.

According to Linda, “I’m very overwhelmed and very proud.  It’s a tremendous honor; and it’s very humbling to think the City would do this for me.  I have always felt appreciated by my City, but this makes me feel even more appreciated for all those late night meetings and long hours of hard work.”   City Administrator Leon Kos says the permanent honor is well deserved.  “She was an extremely devoted and loyal employee.  We really appreciated her thoroughness and knowledge,” Kos said.

Linda says that Issaquah has always been in the forefront on many things, and that perhaps this sculpture of a City Clerk is also a “first” in the State (or even in the nation).  “My greatest hope is that the sculpture will raise the awareness of the position of the City Clerk, in general, and the essential governmental services that the Office of the City Clerk provides,” said Ruehle. 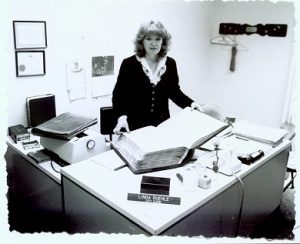 Linda Ruehle at her desk (circa 1976) posing with the City’s original ordinance book. The book starts out with the hand-written Ordinance 1, dated April 1892. (Photo courtesy of Linda Ruehle).