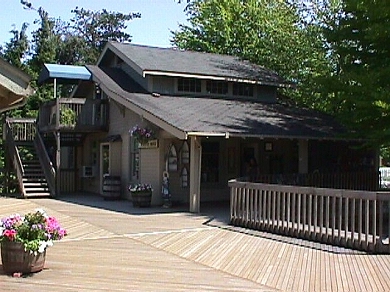 This 1909 house was the real start of Gilman Village. Built by Alfred Morris and Jack Trigg, it has been moved twice. The home first stood where the Darigold plant is now located. It was moved in 1932 by the owner, Louis Krall, to allow for the expansion of the old creamery building to include a feed co-operative. In the late 1960s and early 1970s, the building was home to Betty Konarski’s Country Mouse consignment store. Commercial development of the area encroached on the Trigg House once more in 1972 when Safeway Inc. purchased the land (on Front Street across from the Darigold creamery) for a supermarket. In January, 1973, the house was moved to its present location along with the smoke house built by Mr. Krall.

In 1974 the roof of the house was raised to provide a second floor for business space.