This story originally appeared in the Issaquah Reporter on December 18, 2009. 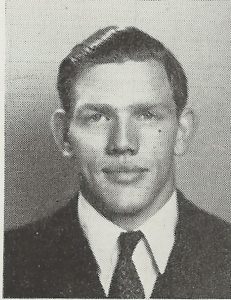 Walt Seil was an Issaquah native, as was his father, Edward “Nogs” Seil, before him.

When Walt recorded his memories for the Issaquah History Museums Oral History Video Project, he especially relished telling stories about his dad’s time as the town marshal.

That was during the 1950s and it was a different era. The sign by the railroad crossing on East Sunset announced that the town’s population was 812. Everyone knew everyone else and Marshal Seil provided community policing before the term had been invented.

Ed Seil was a logger and a city water department employee before he was tapped for law enforcement.

Here are some of Walt’s stories about him.

“When they had to have a new marshal, they asked Dad to be the marshal, so he accepted the job. He didn’t know anything about police work at the time, but he could fight and he handled drunks, so that’s what they wanted. There were two grocery stores and five beer parlors in Issaquah at that time. Issaquah was a pretty rough town.

I’ll tell you something. I was coming home from work one night – I was working graveyard shift at the creosote plant [in Seattle] – and I was coming up Sunset. The [Grand Central] hotel was on the left, and the beer parlor and restaurant.

So I thought, Gee, he’s in trouble. So I stopped the car, got out and went over and asked him, ‘Do you need some help, Dad?’

He says, ‘No. But who’s that car up there in the middle of the street?’

He says, ‘Get it off the goddamn street!’

Then another time, his dad – my grandpa – who lived down by the creamery (Darigold plant) in Issaquah in a house Dad built for him, caused an incident. My grandpa was close to 90 years old, and always liked to come up and sit in the beer parlor and have a few beers.

Well, there was a woman sitting next to him. And be bought her a beer, see. And then another guy come in and sits on the other side of her. He’s going to buy her a beer, and it made Grandpa mad, see. Ninety years old and he’s going to fight this guy because he’s interfering!

So they called my dad in. He took Grandpa by the neck and walked him outside and he says, ‘I’m going to put you in jail until you sober up.’

My dad did not lock the door; he just put him in there. So Grandpa, he laid down on the bed. We got back on the sidewalk and Dad said, ‘You watch.’

One night I was down at Dad’s and somebody called him and says, ‘Across the street there’s a big noise going on.’ So Dad says, ‘C’mon, go with me.’ We got in the car and went up there. And here on the outside of the door is a naked woman, pounding on the door! Her husband had locked her out.

Dad got out of the car, went over and took his coat and put it on this woman. Then he knocked on the door and told the guy who he was and the guy opened the door, see. He took her in, and Dad gave him the riot act. Then he turned around; he didn’t put the guy in jail or nothing.

We had lots of things going on at that time.

Dad did a good job. Everybody liked him. And everybody knew not to cross him. He had a quick temper. He got along great.

He always carried a gun, but he never used it.”

Walt Seil died in October 2008 at age 88. He was a long-time supporter of the Issaquah History Museums and a great resource for information about the old days. He was always cheerful and kind to new museum volunteers.

The last time I saw Walt, I was docenting at the Depot. He pulled up in front on his snazzy red power chair and sat staring at the building.

I went out to greet him and asked what he was up to. “Oh, I’m just out looking around the old town,” he said wistfully.

I went back inside and swallowed a lump in my throat, afraid I had witnessed a farewell tour.

Not long afterwards, Walt was gone.